I opened the app (TomTom Go Mobile) after some time (I haven't touched it for 2 weeks or so?) and it gave me a notice that there was an update (the map data) was available. And soon after I also noticed that an update for the app itself was also available from App Store.

The app's update is available from Apple's App Store but the map update is downloadable through the app on the iPad (or one of your iDevices).

I have "European West" map on my iPad. I have three years until my subscription runs out. I have been a TomTom Western Europe app user since (maybe) 2010. As TomTom changed the way they distribute their software (they stopped distributing the regional apps in favor of one app with subscription based map data distribution), I automatically got this three year moratorium for free.

TomTom's map data are normally (as far as I know) more up-to-date than those of Garmin's. This I have written about from time to time on my blog (TeleAtlas v.s. Navteq) so I won't mention it this time.

One of my MacBooks Late 2009 has been on the public beta program for a while (since its inception of the program) and got the latest public beta update.

It is simplified, way simplified than former TomTom (region name) versions. I like the old TomTom Western Europe better than TomTom Go.

Changes they have made to the new program seem to focus on making the appearance simple so that you don't see as many menus as before. Fewer choices, less confusion, maybe, maybe for first time users. For those who have used navigation programs, having fewer choices does not mean simple but deprived of something.

This deprived feeling may pass over time. I have been using TomTom Western Europe for years mainly for finding cities and learning the routes to them while away from my car or indoors. For this purpose new TomTom Go seems to be inappropriate. Maybe I will stop using it all together when the app asks me to renew the subscription with fees.

I have been using TomTom Western Europe for a while (since 2010 or so). They (TomTom) have changed their program range.

They used to have TomTom (name of the regions) series but now they have TomTom Go. You have to buy the maps you want to have before using the program.

As a user of TomTom Western Europe, I am qualified for a free upgrade (at least for a while) but I have been holding up on the upgrade simply I did not have to.

It happened to me in 2011. My Garmin suddenly stopped working one morning (start up loop) and had to be sent back to Garmin for repair just a week before the Tour de France started and I had to manage the entire car trip (following all the stages) with only TomTom Western Europe on my iPhone 4. [iOS 11.2 and TomTom Go Mobile]の続きを読む
Tweet

Apple has announced various things several days ago. The main focus was on the iPhones 8 and X (ten). I am not interested in buying either of them as they are too expensive.

Today, I received an email from Apple telling me that iOS11 and High Sierra were available for public beta testers like me.

I will definitely upgrade my MacBooks to High Sierra in near future. I am not sure if I should jump to iOS 11. I would very much like to know if I can jailbreak my iPad mini 2 with iOS 11 first.

I had another notice before the event described above.


Yesterday, I noticed that my Google (LG) 5X received a system upgrade notice. It was Android 8.0 a.k.a. Oreo.

The upgrade for Oreo is about 1 GB in volume so I need a very stable and fast connection. I should not try it home as my Internet connection is not too fast nor stable.

I remember reading a couple articles about it but don't recall what the main benefits for this Oreo upgrade were. Yes, almost always they say, "new and improved" but is it really?

This is the manufacturer of the case of my purchase. The site currently has a case for iPad mini 2 and it is named MK2. Probably mine is the first generation, thus retrofittedly called "MK1".

THis is what it looks like and is different from the MK2. 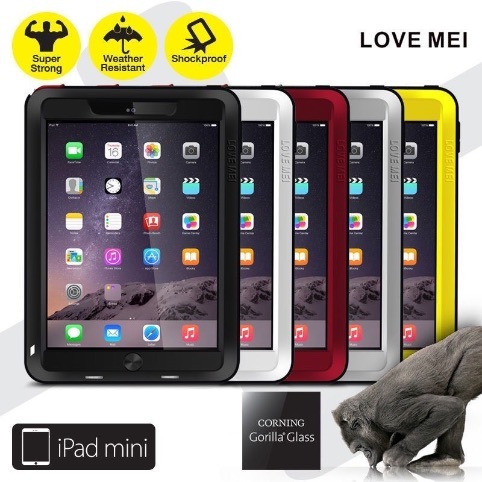 Today it arrived. Actually I went to the local post office to pick it up. I immediately felt that the package was a bit heavy. Too much packing or the case was heavy I thoght.

On opening the package, I realized that my fear was real. The case was heavy, indeed.

It looked sturdy but it was not totally water-proof. The iPad mini inside will survive some splash but the warer will come inside he case.

I thought the front glass was attached to the front cover but it was separate from the case. Any water on the screen will permeate the case through the gap between the glass and the front frame.

It is sturdy for sure; it has to be so as it is really heavy.

One major problem: The charging/sync lightning port opening is tight and my rugged lightning cable won't fit!! As the rugged cable has thicker cord and the cinching plug must be also thicker too. I can not use my beloved rugged cable. I have to settle with my rugged micro USB cable with an adapter (lightning - micro USB). It works and it is OK. Now how should I make use of the rugged lighting cables?

Another minor problem is that the back panel is made of rubber and its surface is slippery and almost no grip feel at all.

Overall I have to say that I don't like this case too much.

What does this mean? This means that Wahoo is actively working on the firmware improvement or just that Android support is so weak that it did not get the latest firmware update a few days ago?

I did some configuration on RFLKT+ on the iPad. RFLKT+ seems to turn off often. Configuring it on the iPad is easier as the screen is bigger.

This firmware update means that Wahoo is actively updating the firmware?

I have been looking for a cheaper solution for acquiring real GPS signals for iPad (wifi only model).

I have looked into dual XGPS 150 / 160 models. I have come to learn about Garmin GLO model, GNS GNS 200 or Bad Elf models. These rather expensive models are iOS compatible and cheaper models are not compatible.

A Quick search led me to this page (https://code.google.com/archive/p/btstack/issues/460).

Here are the gist. 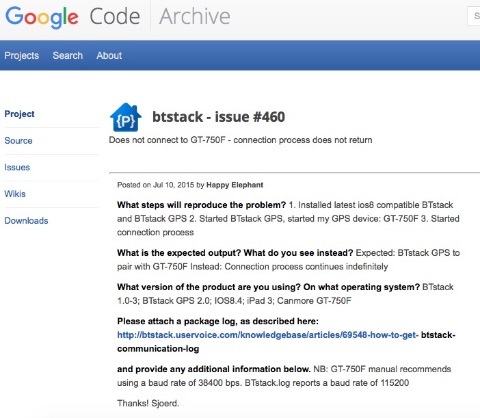 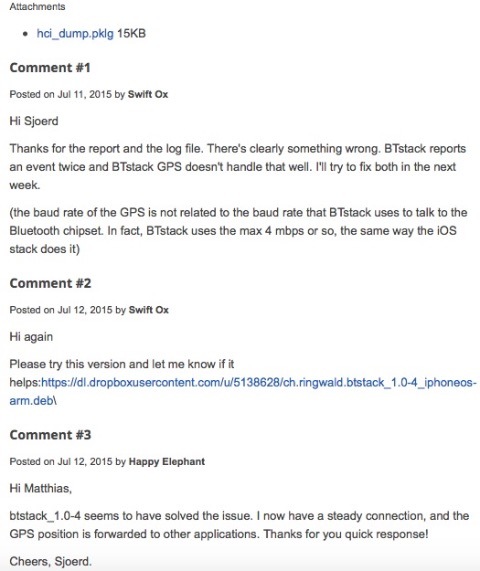 So according to the conversation between the author of the program and an issue reporter, the issue seems to have been cleared. This means that if I could successfully jailbreak my iPad mini 2, I can use this much cheaper Canmore GT-750FL with my iPad mini 2.

I have not yet received my iPad yet and I don't know how it arrives. Obviously the seller / previous owner has initialized the device so that it won't have any private data on it. Has it been upgraded to the latest version of iOS? I guess so. This means that it is on iOS 10.3.1 (according to https://en.wikipedia.org/wiki/IPad_Mini_2).

iOS 10.3.1 can not jailbroken for the moment. iOS 10.2 seems to be the latest iOS that can be jailbroken and at the same time iPad mini 2 is not on the list of jailbreakable models.

Currently a GT-750FL can be obtained through Amazon at around €50 but dual XGPS 160 costs around €144 in Luxembourg from some online shop. The price difference is almost €100.

My ARCHOS 70 Oxygen has aGPS function and my (not yet arrived) Google Nexus 5X also has aGPS functionality built in (as it is a phone, d*mn it!) but using an outside help said to elongate the battery life significantly as Bluetooth uses far less energy.