LSD, not that but Limited Slip Differential

Lysergic Acid Diethylamide happens to sound similar but I am not talking about it.

My MX-5 ND (2017 model, maybe it is now retrofittedly called ND1) does not have it. I don't remember well but mine did not include that option. I vaguely remember that the catalogue I downloaded had LSD as an option.

I knew what "it" was and I did not think it would worth paying for it for me.

Growing up in Japan, the land where automobiles (Toyota, Nissan, Honda, Mazda, Suzuki, Mitsubishi, Daihatsu etc.) and motorbikes (Honda, Suzuki, Yamaha and Kawasaki) even majority of "bicycle components" (Shimano) are made as a boy, I could not help liking cars and stuff. I read and learned the basic stuff about automobiles. LSD was a household name for me since I was about the time to get the license to drive one.

The name LSD could be a bit confusing in the States and the Wikipedia synopsis it appears as "positraction".

"My Cousin Vinny (1992)", which I remember watching in a movie theater somewhere (probably Reseda in San Fernando Valley, suburb of Los Angeles, California) contained the very idea of what an LSD worked mechanically on a car as the key argument which eventually acquitted the poor two college freshmen, one played by Ralph Macchio.

Marisa Tomei was brilliant and consequently won an Oscar for her performance.

Now I downloaded latest Luxembourg catalogue and found that there was no mention of LSD in it.

Of course I missed it. I was (I think) in Luxembourg. I could not have gone there without having to plan rather expensive trip.

Now I was watching some of the YouTube videos of the event. I have not seen them before. Why?

Because it was held back October 13, 2019 and then I had totally another thing on my mind. It was around the time I traveled to Japan to attend a funeral. So I totally missed it.

The next time they (MAZDA and MX-5 fans) have this kind of event (hopefully there is next one), it will be in 2029. What am I doing then? I could be dead by then.

When do we get to our normal life (if we ever do)?

I wonder. I wonder and am afraid that we may never get to it.

What am I talking about? COVID-19? The answer is yes and no. As this COVID-19 is only a one aspect of what I am worried about.

This Corona pandemic is not a real thing. This so-called "new" Corona virus can be new but we encounter new variants of known old virus all the time.

This hocus-pocus PCR (Polymerase chain reaction) testing detects other older known harmful-but-controllable Corona viruses which is known to cause so-called a common cold, too.

And it (PCR tesing) have a huge mergin of error so what we are getting from the testing is something we can not make out.

They may be reporting the falsely padded numbers of so-called infected patients. Someone with an "old" Corona virus can be statistically included in the COVID-19 patients.

We don't know for sure how many of those suspected COVID-19 dead really died from or of it. Old people just died one day from some complications from a common cold caused by an old friendly Corona virus (and then counted as a victim of COVID-19).

Some want to make an anthill out of a mole. Why?

We know how. It involves the use of big media. Those mainstream media broadcast, write, publish and spread the false news and by censorship suppress the voices from people who are woke.

Gary Oldman plays a private sailboat captain who battles the evil at sea.

I was not impressed. I guess that this movie was edited heavily after initial pre-release trial showing to the exclusive audience (or ?) because the audience complained that it did not entertain them.

Toward the end, the captain finds out the mysterious and elusive destination that the previous owners (operators) of the sailboat seemed to have attempted to reach. Why had this "finding the mysterious destination" plot been totally dropped? Instead the story drifted away and got ashore to a boring end.

YouTube® recommended a video and I watched it. The guy who seems to be an Italian and speaks in good English with the typical Italian accent (more ups and downs) gave the instruction how to install a column spacer.

My Mazda ND MX-5 does not have "telescopic (or telescoping)" adjustment on the steering wheel. It tilts but does not telescope.

This lack of adjustment option must have annoyed many of those tall drivers who pull their seat all the way back and find the steering a bit too far to reach.

Mazda eventually addressed the issue when it had a minor update in 2018.

The early ND drivers are left without the telescoping steering wheel. There is a help. This column spacer lets them have the steering come closer but the adjustment is fixed not adjustable.

I am not tall and find the steering not too far but I like to sit deep in the seat so I wished the steering to be closer a bit. The installation seems to be very easy. It adds 1 kg of mass and comes with a price tag of 245 Euro (I don't know about the shipping).

"Giacomo Pizoni" on YouTube
URL: spacershop.com
Daily Driver Motorsport
Based in Milano Italy
I want it but I am not getting it now. Only if I get a raise?

If I order(ed) it online and let it delivered to Luxembourg, it would cost 30 Euro for shipping. 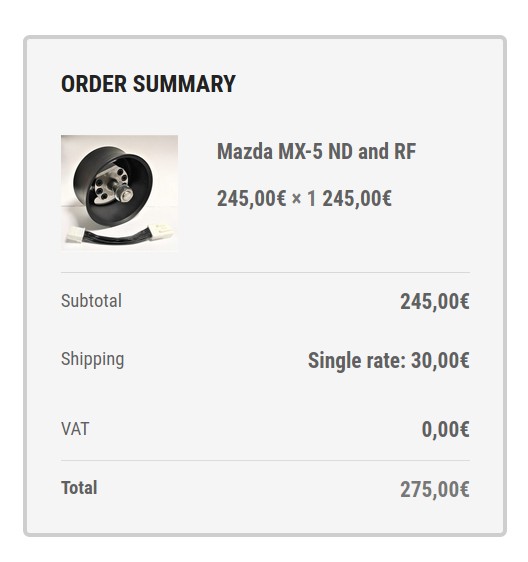 Is the battery fully charged?

Is the battery fully charged?

I wondered if the charge was finished. I disconnected the battery and unplugged the AC line and then reconnected them all to see. The green LED shone brighter when the cramps were not engaged. I figured that this meant that the charge is not 100 % but somewhere on it way to full charge. So I let the device continue to charge the battery and went to bed.

This morning I woke up to find the green LED got brighter than it had been the previous night. It is still not as bright as other LEDs (red and orange) next to it. Does it mean that it is still not fully (100%) charged? I think it is enough already.

My MX-5 has a problem of losing the battery charge in a week or so. It is OK. I will put it back in my MX-5 later and drive to the supermarket.


"Iran Everything Forbidden Anything Possible (2018)"

It is an interesting movie. I knew that (from some YouTube videos I watched) a few of the things I saw in this movie are going on. I did not know the extent of the enforcement by the authorities was go tight.

The movie title describes the content of the story ahead so well.

Some photos that I did not upload before as I was too lazy.

1. Hannah and me going out on a date on St. Valentine's Day. She poses on a fallen tree stem. She is about 5 meters above ground.

2. Hannah resting comfortably. This tree bridge is not man-maid. It just fell years ago and left as it is.

3. Hannah is looking at the activities below where small animals (gerbils?) are running around.

4. Recently cut stub on the forest trail. This is neatly trimmed for the safety?

5. Someone placed bird feed there.

6. We had snowy days back in Janurary.

This morning (Wednesday, Feb. 17, 2021) I got a delivery from someone (but working for DHL) and he handed me a neat cardboard box from Germany.

Inside I found what should be there, namely what I had ordered, reeds in a box, mouthpiece patches and a cleaning swab. I am happy about the swiftness of the delivery.


The leaking current in the system?

I have been plagued by this problem - the main battery (sealed lead acid 12 V battery) dies to the point that it can not start the engine in a matter of one week or so.

I noticed the problem when we (general population in Luxembourg or Europe) were hit by COVID-19. We have free public transportation (buses, trams and trains) here in Luxembourg and because of the lockdown, I used my Mazda MX-5 less early last Spring (2020) and left it parked for a while.

Today, I wanted to drive to the local supermarket but the battery was too weak to make it happen. I removed the battery and now it is hooked to the charger (AC 230 V to DC 12 V) and being charged. It will take almost a day (or at least overnight depending on the level of discharge) to complete. The last time I remember it took almost an entire day.

I was afraid that it would not start this morning. I knew the battery was weak as I had not driven it for about a week.

Why? Why did it happen and does it happen so often? I have to conclude that something is constantly eating the battery away even though the ignition is off. What is it?

2. it won't be the case as I made it sure it drew the power from the fuse that is dead when the ignition is off and the GPS navigation device turns itself off when the engine is off.

3. I don't know. Nothing is attached to the coupler but it could be eating some electricity.
1. I have to ask the mechanic to check the system.