Now I have Kali Linux and Ubuntu Studio on a HDD. Both Linux distributions demanded their version of GRUB to be installed on the top level of the HDD, where UEFI also lives.

I gave both of them a try and liked US's (Ubuntu Studio) version although Kali's version had a better background.

Q: How to change the behavior of GRUB?
A: Make changes to the file /etc/default/grub

Q: What to do after making changes to /etc/default/grub?
A: Run the command "sudo update-grub"

Q: When some rouge programs overwrite the GRUB, what should be done?
A: Run the command "grub-install /dev/sd*"

I erased it from the HDD and replaced it with Kali Linux. Although I liked Haiku OS, it is still in a beta status. I hope I will reinstall it on my PC soon.

Does someone notice this?

I am very sure that nobody is reading this. Nobody is reading this English part except for those bots that obligingly and laboriously visits anything in the Internet traffic to watch out for something like search engines and military intelligence software programs whose business is to know. So writing some personal things here won't hurt a bit as long as it does not involve some sensitive matters.

So I write this here. Recently I bought a musical instrument on eBay from the United Kingdom. As I am not sure if I can play it well, I am not writing it in Japanese.

I bought a used Sopranino Saxophone. It is an old one (The seller acquired it several years ago and has neglected it since as he has other Saxophones that are in greater demand in gigs) but preserved well. It was not expensive as it is a cheap one made in China (continental or Taiwan).

I am anxiously waiting for its arrival. Though it comes with at least one reed (a photo seems to suggest), I need to buy some more. I will probably buy ones intended for a B flat Clarinet. I can buy the ones intended for a Sopranino Sax but as Sopranino Sax is an odd one or a black sheep in the Saxophone family, the market is too small and subsequently the reeds are also not easy to purchase. It is supplied in the market but for me acquiring this substitute costs less.

I installed Ubuntu Studio 20.10 from its DVD iso image burnt on an actual DVD disc. The installation was from scratch, in other words, I re-partitioned the HDD and erased everything on it.

After the installation, the usual updates were installed. Then I installed a couple of packages related to mozc, a Japanese Input Method to write in Japanese.

For the moment everything seems OK except that when I try to play some movie files with VLC, it simply exits. I don't know if it is a bug. The VLC used to play them without problems when I was running Ubuntu Studio 20.04. Time will fix it, I believe.

Later I have to make modifications to some setting files so that I can select which partition to boot from as I am planning to install one more OS (probably Kali Linux) on a partition I reserved.

GRUB selection screen has to be visible when starting up.

I happened to have a 2.5 inch SATA HDD that I took out from one of the Mac minis I own. I used it to install Windows 7 on, I believe, Mac mini Late 2009. I just installed and tried to install the needed drivers. I remember I abandoned halfway through.

I needed to have some environment where I can run a DOS program to update the BIOS firmware from current A12 to A15. As soon as the machine booted in Windows 7, I ran the program. The machine immediately went to reboot and on start up while the screen is still blacked, the flashing message came up telling me that it is flashing and it may take up to 10 minutes to complete. It took only 1 minute or so. It successfully flashed the ROM.

No visible nor tangible differences at all after the flashing. It is supposed to be so.

While I was on Windows 7, I played some card games and wasted my life. They are addictive. That is why I erase all the games on my Linux desktop environment. They (Ubuntu flavors) normally come with some games preinstalled.

Luxembourg did not have Decathlon in Luxembourg. Kind Decathlon Belgium built one store on the other side of the border near a Belgian city, Arlon. There you have IKEA, too. You just have to drive around 15 minutes from the capital city of Luxembourg. Yes, as you have guessed it, there is not IKEA store in Luxembourg.

One year ago around the time the tram like made its way to the center of capital city, there was an announcement that Decathlon would open in the newly developed part of the city. I don't think it has materialized yet. Perhaps the COVID-19 crisis has something to do with it.

I rarely shop at IKEA but I do shop at Decathlon for some camping gear. Are they coming or not?

Movies and some more movies

I did not have any great expectation before I watched it. It turned out to be a good movie. It is not an Oscar quality but better than many others. The killer's motif sounds not so convincing but the twist worked for me.

"Underwater (2020)"
It is a deep sea version of Alien or alternate version of The Abyss or The Sphere? There are many other deep sea action movies and this one is above average. It is entertaining and certainly Kristen Stewart is pretty. She keeps the audience seated till the end.

"Restraint 2008)"
It stars also Kristen Stewart. It is also entertaining. The agoraphobic character reminds me of a character played by Sigourney Weaver in a movie Copycat (1995). Kristen Stewart is not the one who confines herself in a house.

Here Kristen Stewart also does her job and keeps the audience from turning away.

So far I have make it boot off the very HDD that was installed on my broken HP Pro 3120 SFF. I salvaged the components from it and transplanted some of it in Dell Optiplex 780.

The first stage is just to boot it and see how it boots. The HDD and the memory modules were transferred.

I knew that F2 key would lead to the BIOS screen. I realized that one of the photos that the eBay seller put up was this BIOS screen.

As expected, the BIOS version was A12. This has to be updated in time. 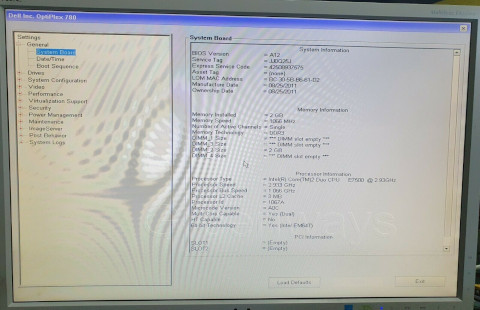 The BIOS screen was like nothing that I have seen before. I have not owned any Dell machines before. It looks like some utility program of Windows 7 or earlier.

I have not made any changes to the HDD contents but it booted from it and if fact Ubuntu Studio and Haiku OS worked very well.

The BIOS settings are extensive than those of HP Pro 3120 but it does not include any performance tweaking settings like changing the clock speed or anything.

The next stage is to refresh the contents of the HDD and rebuild the system. I will initialize the HDD and install Windows 7. After that I will flash the BIOS to latest A15. Then I won't need Windows 7 anymore. It is totally unnecessary.

The ISO image of the Ubuntu Studio 20.10 must be burned onto a USB flash memory. This will be the installation source.

I want the graphics card but it needs an extra power source (6 pin plug). I have not yet purchased the necessary cable. So the installation will be delayed. I need to save some money to pay for the item that I purchased on eBay from the UK. It costs me a bit more than I should be using this month. So the purchase of those needed small items can wait for another one month or so. I can keep using the system as it is now for some time.

Pick-up at the DHL facility

I picked it up this morning (well, February first, 2020 and if it helps someone in the future, I also say it was Monday) and after struggling to collect and discard the plethora of S-shaped packing material, I started looking into the content.

A Used Dell Optiplex 780 MT (Mini Tower) which is ready to accept full-height PCI cards (not like those half-height a.k.a. low-profile cards for those SFF chassis).

Inside the chassis, I found a HDD caddy, which the seller's description of the item claimed non-existent. Otherwise the item was pretty much as it was described.

I have to clean a bit and start transplanting the missing components from HP Pro 3120 SFF to complete it. I am now looking for the detailed schematics or at least the mainboard diagram explaining the connectors. I downloaded PDF files from Dell's support page but the service manuals are not so kind to me.

I noticed a dangling power connector there. I later realized it was a power supply for an FDD ( floppy disk drive). I may be able to convert it to an IDE power supply to power the graphics card.

Now let's do some work and see if it boots!