to be written later

I ran some simulation. If I buy a Hozelock Porta shower from Amazon (GB), it will cost around €30 including the shipping. It is far less costly than buying it on Amazon (Germany).

On the other hand, there its similar product a Freshower (by an Italian company) costs more than it does on Amazon (Germany).

Conclusion: If I decide to buy a Porta shower device, I will buy it from Amazon (GB).

In Japanese:続きをどうぞ [De Ronde (van Vlaanderen) and other things]の続きを読む
Tweet

So I am just checked in the cheap hostel in Brugge and sitting on the bed and writing this. The local time is now 20:15.

To my surprise I just found out that this dorm style hosel is gender mixed hostel. A young girl just walked in the room and took the bed below me. At this hostel, the bed is also designated at the check-in so I did not intentionally chose this bed, the upper banker.

This is Belgium and this is not surprising but I did not carefully read the descriptions of the hostel rooms when I booked it. No problem on my part at least.

So I also found out at the check-in that breakfast was not included in the price that I paid. The girl at the counter told me that if I want to take the breakfast all I have to do is pay €4 in addition. She said I should just come in check out the food before I decided.

The race
I left for Brugge around 2:50 a.m. and purchased a bit of premium gasoline at the local gas station. The reason was that when I tanked on previous Monday because the nozzle was cranky or the angle of insertion of the fuel nozzle gun was not optimal, the pump stopped prematurely and I had to pump several times. I feared that I could eventually overflow the tank and I stopped after 25.93 litters.

When I turned the engine on after paying for it, I realized that the tank was not really full as the picture shows.

As the gas price is lower in Luxembourg, I wanted to tank as much as possible before leaving. This time I got it full.

Now I log them (2 tanking occasions) on the app "Road Trip" on my iPad so that I know the fuel consumption tendencies of my Mazda MX-5.

By the time I come home, I will be fueling once in Belgium and as soon as I get home I will tank again to prepare for the upcoming Sunday trip. On this coming Saturday I will try to change the tires to summer tires. I don't know if I can find the time to do it. If I did manage it, I would be able to compare the tire friction factors (winter / summer tires) and be able to see the difference between them in terms of fuel consumption (milage) rate.

It was around 150 km (?) before Brugge a warning chime rang out accompanied by the warning sign on the console. That TPMS again! I had this during my trip to Italy/Switzerland back in October 2017.

I drove for another 20 km or so before finding a proper place to stop. It was a parking along the highway. A lot of truckers were sleeping there. I took out the foot-operated air pump and checked all the tires and their air pressure. They looked alright but I pumped them so that I was really sure that I had enough air in each and every one of them. After resetting the TPMS, I drove on.

I stopped at a parking (with a gas station, bathroom facilities and 24 hour shops) along the highway about 50 km before Brugge and tried to take a nap in vain. I did rest a bit. Around 07:30 I drove on and arrived at Brugge center around 08:20.

This time frame description means nothing to the readers (if there are any out there and I know there are none at all!) but it means a lot to me as I can remember how I drove when I plan similar trips in the future.

They use the same Markt square as the team presentation and start venue. The difference is the audience is much more sparse than De Ronde.

I drove to Kemmelberg after the start. The area surrounding Kemmelberg is the only (as far as I know) hilly area in West Flanders region. So Gent-Wevelgem which takes place on coming Sunday also features the same climbs.

I after this I (we as I had one passenger) drove to the finish town of De Panne. It was my first time there. It is a small coastal resort town and it features a amusement park, which my experienced passenger called, a Belgian version of Disneyland. I saw water slides and some kind of roller coaster structure just as I passed it, which (roller coaster thing) my passenger also testified that just newly added.

The race was won by Elia Viviani in a bunch sprint. I did not know that this Quick-Step Floors rider could speak excellent English.

As always I am very impressed by the way local people nonchalantly speak Flemish (Dutch), English and other languages (French or German and for some others like Italian or so on top of them).

I did not take a route normally I took when driving up to Liège, Maastricht or Lanaken. I took a route which runs through the middle of Luxembourg up to Wiltz then swerved to the direction of Bastogne (Houffalize).

On the way I dropped in on a gas station in Pommerloch, Luxembourg. I had never been there before as long as I could recall. At this Q8 station, I filled up the tank and duly noted the purchase details and the odometer readings to put them all in an app called "Road Trip" on my iPad mini 2.

I did not know at that time that I was pumping my car in Pommerloch as I did not see any name. I looked for this village on the BaseCamp on my MacBook Pro mid 2010 after arriving home. I knew that I passed Wiltz and later a small village called Bourcy (Belgium) so I could narrow the search to a small area between these places.

Here are some pictures. 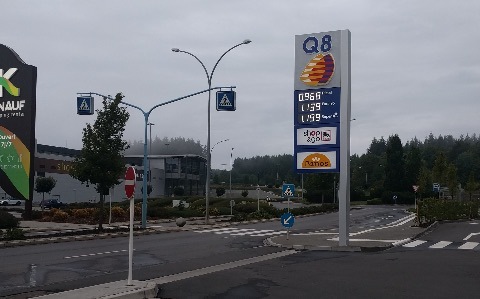 There were other gas stations nearby other than Q8 for the Belgians and other passing people. It is a common to see a herd of gas stations near or on the borders with surrounding countries. 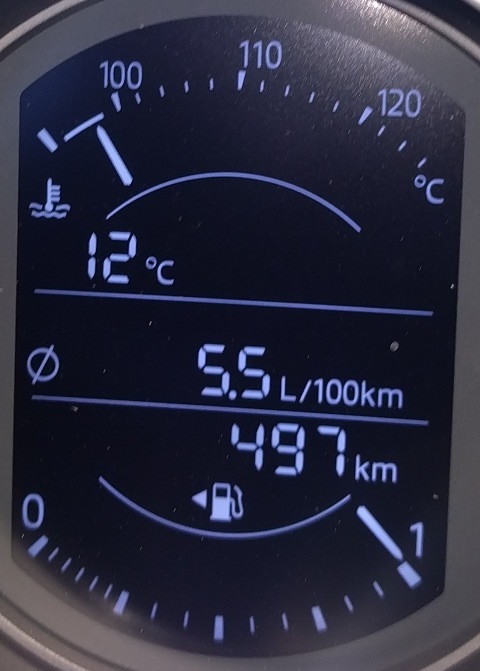 The left side meter on the console indicates the total distance and some other information. The car itself assumes that I am consuming around 5.5 litters per 100 km.

The pumps accepted payment by cards but did not offer any paper printout so I recorded the transaction on my phone.

Road Trip tells me that the fuel consumption rate was 5.47 litters per 100 km. As you can see the car had already guessed it correctly. Good to know that those numbers are correct.

A souvenir from Lanaken, from ALDI (supermarket) in Lanaken. I bought 4 of them each costing €1.76.

On the way to Lanaken it rained a lot. In Lanaken I noticed that the soft top canvas was all wet and soaked. There was no sign of waterproof effect. I wonder that the money and time I spent on waterproofing the soft top was worth anything. After a sustained rainfall will the waterproofing agent (some kind of wax, I guess) wash down completely?

I might be wasting my money and time with those watery spray chemicals. I will use the spray cans to see if they are any better.

It is unfortunately rainy. I am going to bring an umbrella with me.

I am leaving Luxembourg sometime early in the morning (before 06:00) and take a rather leisurely route before hitting E25 (highway) at Bastogne. I will be able to enjoy some of the forest roads in Luxembourg.

From Bastogne I will be driving on highways. I will be in Lanaken around 09:00.

On Thursday, August 10, I am planning to drive to Lanaken, Belgium not far from Liège (Belgium) or Maastricht (the Netherlands), or for that matter not far from Luxembourg.

It means that they (peloton) ride in a kind of circuit course.

Unfortunately the weather in Lanaken, Belgium on Thursday is dismal. According to Weather.com, it looks like this and it is not going to be a sunny day. 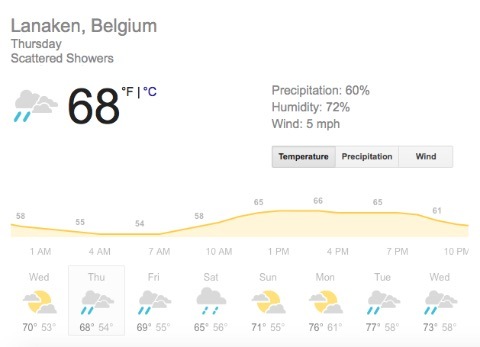 I am not sure if I should take my bike with me. What I need for sure is something against the inevitable rain drops.

I enjoy solving crossword puzzles. I got into them when I lived in the U.S.A. Since then, I have kept the habit of solving crossword puzzles. There was a interesting answer that I solved by hunch aided by my knowledge of the geography of Belgium. I know city names of Belgium if they mean something in cycling sport. Like Liège, which hosts road races like Liège-Bastogne-Liège and also frequently hosts stages of Tour de France. There are many names that I know since they are related to road races.

So when I was to guess a name of a place, which ended in "D," I somehow managed to guess it correctly.

I am buying things needed for my Mazda MX-5 and some other things.

I have not decided if I should buy Boot-Bag from boot-rack.co.uk. It seems that it is inevitable that I have to buy this Boot bag vacation type to go on a long term car trip.