The entry before this has not been finished but I am writing this.

I headed for Mende from Hostun. It was not a pleasant trip. I have to drove over some mountain via a pass called Col de something that I don't remember. It was well over 1,500 meters above sea level and it was raining and the lightning was threatening me (I was not scared but it did try to intimidate me).

In the end I drove through a very narrow place (under a rail track I guess it was a single track because it was so short and narrow) in the middle of the night. Only a normal car would pass and no RVs would.

I came to a town after this torturous drive (by the time it stopped raining) and the first thing I saw at the T-section was a motor home. So other motor homes came from other direction on their way to Mende.

I was lead by my Garmin nüvi to go through this ordeal by being led to this tortuous mountain pass while other RVs and cars drove by way of safer and easier routes.

There's an alternative to this human navigator. Garmin RV series devices. They are sold for campers and RVs and because they are normally bigger (wider), talker and heavier, it is far easier for them (or their drivers) if they could avoid narrower and steeper mountain roads or any other obstacles on the way like narrow tunnels, small bridges and so on.

Obviously those RV series devices have two sets of maps, one normal route map and other other topology.

Those RV series devices are a bit expensive and I can not afford it for the moment.

This year's version of the Tour de France had a small bite of Spanish territory during Stage 16. I specifically wanted to be there.

Stage 15 was fought near Carcassonne. I was on the climb of Pic de Nore (1,205 m - 12.3 km at 6.3 %). After the stage I wanted to find a place to stay (and sleep) before visiting the hotel where Team Quick-Step Foors were staying the next day but the camp site near Carcassonne had no vacancy and I was so impatient, I decided to drive to Spain, instead.

By the time I crossed the border (between France and Spain), it was around 23:00 (I guess). I had already given up the hope of checking in a camp site there before leaving Carcassonne. I did not know the area and expected to be rather desolate rural area. It turned out to be decently modern and touristic area but still retaining the green beautiful characteristics of Pyrenean mountains.

I found a 24-hour open gas station with a huge parking so I rested there and had a short sleep until the morning light. I went into the small shop and bought some food. The prices were lower than I had expected them to be. This was the moment that I felt that I was in Spain.

I took some photos in Spain but most of them were the opening hours notices on the front of the stores and shops in the village. They still do close the business for the long lunch (and optionally a nap) hours and stay open until rather in the evening.

So I stayed in Spain two nights. I could stay at one of those camping grounds (commercial) that I spotted there but I decided to stay on the roadside of Col du Portillon (specifically on the Spanish side).

There were people (mostly with comfortable motor homes - in French they are called 'camping cars' and they pronounce "camping" as if it is an English word and they are among few words that the French imported from English language without changing their pronunciation like "weekend").

I visited (or stayed at) these three towns.
1. Les: Where I spent a night inside my Mazda MX-5 at a parking lot of 24-hour gas station.

2. Bossòst: This is the pretty small town at the foot of Col du Portillon, where I spotted a Trek Travel van (Spanish registration). I could buy some food at a local smallish supermarket but their opening hours did not suit me.

3. Vielha: I wanted to shop at a supermarket quickly in the morning on the second day so I drove to this bigger town. I shopped and then full my MX-5 up. The food and gas prices were lower than those in France.

Bike rack
The Saris Solo worked but it left something to be desired. First of all, (and it is not this bike rack's fault) the four feet (or their foot prints) were too small and they (lower feet) sank into the plastic bumper making temporary dents when the bumper was really hot and soft under the relentless summer Sun.

I chose Solo because it was light and small but I might have chosen Saris Sentinel 2, which is a bit heavier and bigger but has a bigger foot print on the bumper so that the pressure on the bumper will be smaller.

I wish (and wished) that I had a hitch ball on my MX-5 and a matching bike rack on it for ease of putting the bike on an off and of accessing the content inside the rear boot. 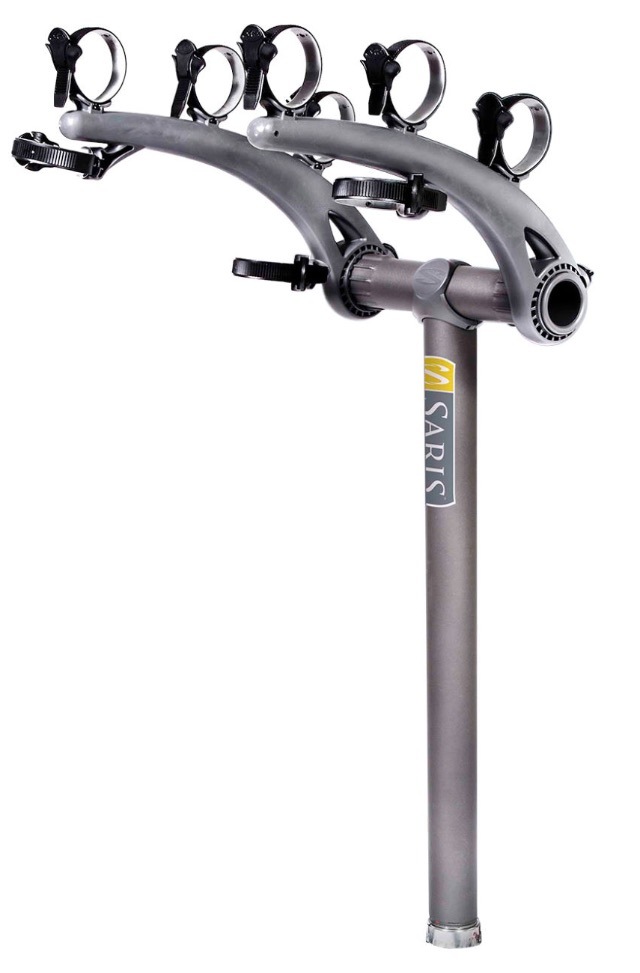 Installing the hitch ball on my MX-5 would cost around €1,000 here in Europe. Is it worth having a hitch ball? Does it save space and trouble?

Let me ponder on it! 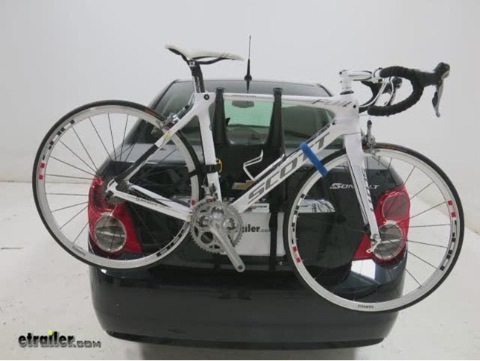 The picture above shows a bike hung on the Saris Solo with two wheels on. I did not and have not done this because the high profile wheels (my Zipp 404) will create a significant amount of wind resistance force and subsequently the bike can bounce on the car. And more importantly because some of the passages in the mountains I drive are so narrow that sometimes the distance between me and the opposing cars are within 10 cm at the door mirrors so the protruding wheels will hit the other car and will be damaged.

I found a much cheaper DIY (installation) base trailer hitch (like Hard Dog Hitches) sold in the States but those seem to have no Europe distributers. It is highly unlikely that they will ever have ones (distributers) and get a TÜV certificate.

It would be nice to have a hitch ball and a matching bike rack (like the Axis 3 show above) because this way I can open the rear boot any time. But because of the narrow road conditions, I don't want to leave the wheels on the bike.

Car accident(s)
OMG! I had two accidents during the Tour de France trip. Not once but twice and none of the occasions I was at fault. Their (French) driving manners were so bad as you can see. No? You don't? Then, let me describe what happened.

Some thoughts on what I might do next year

My favorite rider, Bob Jungels, finished the Tour de France at 11th in the general classification, which is really a great achievement. He even finished the last time trial (Stage 20) at 6th, which was also great.

In the morning of Saturday, July 28 I was on the course. I spent the previous night in a tent on the roadside grassy area along the course.

Other riders from Quick-Step Floors might have been on the course on their bike on different stretches and then retreated or could have been in the car to check out the course.

I think almost all riders (who were still in the race) from Team Sky came, too. Chris Froome and Geraint Thomas came side by side talking something (meaning relaxed). They got booed down by some French spectators on their way up.

I could see Bob ride the bike not just for a reconnaissance as an obligatory ride but I could see that he was serious about closing the gaps so that he could improve on the general classification. I could see it. Not so many riders looked so intent as Bob did. When I learned that Bob finished at 6th, I was not surprised.

Most riders (up to top 10 or 20?) were 2 minutes apart when they went up the ramp. Some riders who were good at this discipline had already caught up the preceding rider (or riders) by the time they came in front of me. In fact I think I saw at least 8 to 9 riders together within, say, 50 meters during the stage. At least I saw three riders together once.

Bob passed really soon after his predecessor did. So I knew he had been really aggressively riding. After Bob passed, I hoped that Ilnar Zakarin would appear rather late but Zakarin came around just 2 minutes after Bob. I was a bit surprized to see him so soon but Zakarin had been also doing a very good time trial ride.

I am back and have been working for two days by now.

I want to write down what I believe is informative, interesting or worth something here later.

All I can say now is that I came to realize that I was really getting old.