Bike/Train commute since this Tuesday

Economically, it is benefitting and it is also good for my health. Why haven't I gotten into this habit earler? Lazines?

Because I want to see my baby (Hannah the cat) and feed her regularly, I decided to get into this routine.

I heard that public transportation (at least part of it) is getting free next year. For the moment, I have to pay € 50 monthly to ride the train/bus within Luxembourg. It is still cheaper than paying for the gas and other inevitable expenses rising from car commuting habits.

I have to be patient as the trains never (if not almost never) arrive in time. Delays are always expected.

Hannah is doing well in many ways. First of all, she is growing in other words, getting bigger physically. I have been teaching her not to bike me on my fingers and hands. She still bikes but not too often and every time she does, I gently instruct her not to do so. I think it is working and I will have to keep doing it.

She and I go walking in the forest nearby (thank God that we have a lot of nature around us, of course not so much as the planet of Endor).

I let her explore the forest freely on Saturday morning, Sunday afternoon and Monday morning. 2 to 3 hours and sometimes more! She meanders so the walking distance is actually not so great. The important thing is she enjoys climbing up banks, trees, piles up logs, fallen tree trunks and roots. She seems to be really enjoying herself walking in the woods.

I don't use any kind of leash while walking her. It does not make any sense doing so.

First, I don't have to as she follows me. She goes MIA while exploring the piled logs and branches for 5 or 10 minutes as I wait for her nearby. After a while (5 or 10 minutes) I call to her and she appears and comes to me running. She wont run away.

Secondly, it is impossible to do so as she meanders in the woods.

Thirdly, she won't attach anybody or any dogs, instead she hides herself while waiting for them to disappear from her sight. There's no possibility of causing anybody any harm (unlike some dogs might).

Finallly I decided to do this. It will cost me € 50 per month to do so. The monthly fees for the public bus and train transportation within Luxembourg costs € 50. I don't intend use the busses unless it is raining hard. I take my bike to the station.

By doing so I save money. Unfortunately, I don't save time but at least I am saving something.
[Hannah is doing well.]の続きを読む
Tweet

This year there were several at least 4 but I guess more SUVs with NTT logos (film-wrapping?) before the race (after or before the publicity caravan passage).

As I am Japanese, I have known NTT all my life. Actually, the company (it started as a Telecom monopoly company owned by the government long time ago, I believe) changed its name to NTT (at least popularized) around the time the Internet became popular.

A friend of mine (who came to Belgium to watch the Tour) told me that NTT was a parent company of Dimension Data and that was why those SUVs were there.

I wondered why they showed their logos? NTT do not do much here in Europe or at least they are virtually invisible and inconceivable.

I thought of a possibility of NTT taking over the Dimension Data as a title sponsor for a second but thought it was not likely as they (NTT) were almost invisible here and I myself did not have any idea what they had been doing if they had been doing something at all.

Today (August 19th) I read an article on cyclingnews.com that Team Dimension Data would become Team NTT in 2020. Wow! I was right but I never thought it would be treality.

Team NTT? Would there be Japanese nationals on the team?

I walked her in the woods. On Saturday and Sunday it was drizzling but in the woods the leafy trees protected us so we could walk.

Today it was sunny so I took her out and spent almost 3 hours in the woods. I hope she was happy.

In the woods nearby (popular with people jogging, walking dogs and doing other activities) were rather busy even on Monday.

A man who was walking two small dogs (Pomeranians?) said, "You are waking a cat? Well, that is different."

I was wondering if my Hannah's biting me (on my fingers and hands) was a bad sign or not. She bites.

I came across a video on YouTube explaining how to make a cat stop biting and convinced that Hannah was not too happy as she had not get enough play time with me to burn some calories.

I walk her around 2 hours (each time) 2 or 3 times a week (when the weather permits). She burns a lot of calories walking (actually, she dashes and climbs up some trees or stubs in between crouching in the bush) but it was not enough to satisfy her urges to hunt. She (a cat) is a natural hunter and has to fulfill that urge.

I came to realize these basics while watching this video done by "Kitten Lady".

I rushed to a local pet supply shop and bought some toys and went home to see if they would please her.

One of the items was a usual cat toy with simulated pray-like objects on an elastic band with an extra long stick. I set it up so that Hannah can play with it without me swinging the stick.

It worked and she kept playing (attacking the objects) while occasionally wheezing with her tongue out. An exhausting exercise!

This was a record. She did not bite me once for more than 8 hours or so.

I have to get some more effective toys (in case she gets tired of the current ones) occasionally to divert her attention from my fingers to those simulated prays.

Remedies for my laziness

I walk my cat in the woods (nearby forest) when possible. My beloved Hannah follows me so I don't use any kind of leash on her while in the woods. While walking to the woods on the sidewalk of the street, I hold her in my arms so that she won't stay into the traffic.

She seems to be enjoying the walk in the woods. Usually I walk her around 2 hours. Unfortunately I can not do this every day, I try to do it 2 or 3 times a week. I just hope that the weather holds when I am off.

When (and if) I move to a new location close to my work, I would be able to walk her more often.

I ordered this item on Amazon (Germany) and I am waiting for it to arrive. 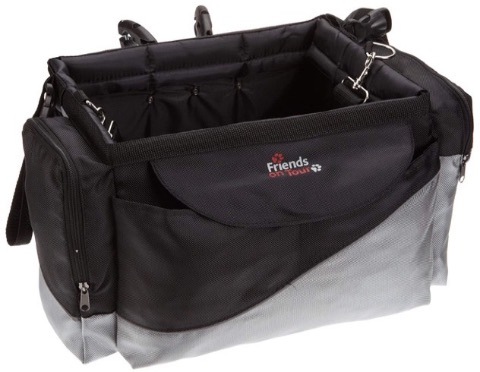 Trixie Front Box seems to be the name. Whatever it is called, it is an bag (box) that attaches to the steering handle of a bike and holds an animal. It should be big enough for a Chihuahua or any cat. 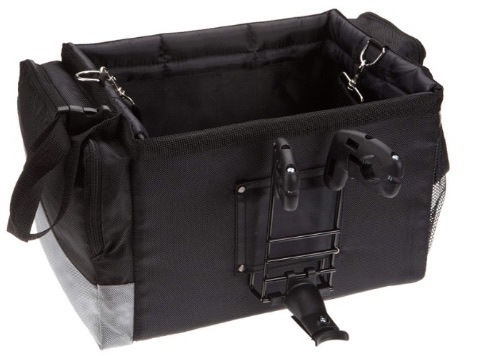 I don't think this attachment device fits out of the box on my bike. I will have to make some modification to it.

I am not sure how my Hannah reacts. Will she sits and gets relaxed while being carried on my bike? How long will she tolerate it if she doesn't mind being taken on a ride?

She is growing and getting bigger in size. She was tiny when I got her but now (she is now 3 months and two weeks old) is bigger and hopefully she will fit into a harness made for dogs or cats.

The one (I mean harness) I was using during the trip last July was a modified harness meant for smaller rodents (ferrets, rats, rabbits or similar sorts).

She needs to be a bit more fat to fit into those right ones.

I should have known

During the trip (my summer vacation following the stages of the Tour de France), I noticed that my beloved Hannah kept scratching her rather often.

I suspected the mysterious small insects (or bugs) crawling in her coat (fur) were the cause. After all I let her out in the wild everyday during (and often before and after the trip).

I should have known that she was very vulnerable to those bugs in the wild.

I made an appointment with the vet after coming home with her and talked about it. Before going to the vet, I was tempted to buy one of those fleas/lice repellent drops at the local pet supply shop but I decided that I should first see the vet.

He gave me supposedly a clinically stronger version of those drops. It cost me dear, around 10 times more expensive than one of those sold at pet supply shops.

Some argue that cats don't need being given a shampoo wash as they regularly clean themselves. I know it and I understand the argument. She is a outdoors cat and the inevitable contact with bugs and other contaminants (some animals' excretion and others) will require my intervention. That is my counter-argument.

I have already given her a wash with a bug repellent shampoo and it seemed she (Hannah) was not so dreadful of being soaked in water. She did not cry at all. She is a tough girl and I know it.

As I have written that she did not even wince a bit when she was given two shots (vaccination) and a bigger shot (microchip implant) at the vet before the trip.

A walk in the woods with my cat = walking the cat

Here in Luxembourg, I live in a small commune (a town / village) close to the capital city of Luxembourg but still the nature is abundant in my area.

Just a few minute's walk will take me to woods (or a small forest) where joggers can freely run (wider paths in the woods) or to anther forest (other side of a wide road) where narrower paths are meandering.

I took a considerable time exploring the former paths but still I found paths not yet trodden a few days ago.

Yesterday and also Today I walked my cat in the latter forest (along the Alzette, a streamlet). I knew there were narrower paths on this side of the bank (not a mountain but hills) but since I did not (and do not) own a mountain bike, it never occurred to me that I should explore there.

I have seen mountain bikers coming in or out of those paths.

I found that walking along these paths (narrower paths) was also as fun as walking or biking on the wider paths on the other side (bank) of the Alzette.

Those hills are around 30 meters high (or a bit more?) from the river lever, I guess.

The former is suitable joggers and dog walkers and the the latter is more suitable for mountain bikers and hikers.

When I walk Hannah, usually I don't have her on a leash. I hold her in my arms when I walk on the sidewalk and when we arrive at those paths, I let her go on her own. She won't go away but stay with me within a radius of 10 meters or less. A wise girl!

In Japanese: 続きをどうぞ [A walk in the woods with my cat = walking the cat]の続きを読む
Tweet